Izotope have improved the formula of their 'do everything' mixing plug-in. Is this new Alloy platinum sterling, or pinchbeck?

A nice feature of the new Alloy 2 interface is the Overview page, which displays the most important controls and visualisations for all the active modules.

Izotope's best known product is probably their Ozone mastering suite, a sort of super-plug-in which combines all the processing and effects you could possibly need on your master bus. Alloy uses much of the same technology, but is adapted instead for use with individual instruments at the mixing stage. The original version, which was reviewed by John Walden in SOS April 2010 (/sos/apr10/articles/alloy.htm), has now been superseded by a thoroughly overhauled version 2. This adds native support for Avid's AAX plug-in format, and now works in both 32- and 64-bit hosts without any bit-bridging.

The basic concept is unchanged: Alloy comprises seven processing modules, which can be placed in any order, almost like plug-ins within a plug-in. Most of the individual processors are very versatile, notably the two Dynamics modules, which can perform multi-band compression, gating and upward compression as well as conventional gain reduction, and which can be placed in parallel for some interesting effects. The EQ and Exciter modules would likewise put many dedicated plug-ins to shame, and the Transient Shaper, De-esser and Limiter are no slouches either.

A new preset manager helps to navigate the 200+ presets.

Version 2 adds no new modules, but improves those that were already there, as well as adding a number of global enhancements. The interface is larger and more friendly, and now sports a useful Overview Panel which shows the most important controls and visualisations for all modules simultaneously. There are more than 200 new presets for the plug-in as a whole, and it's now possible to save and load presets for individual modules too. 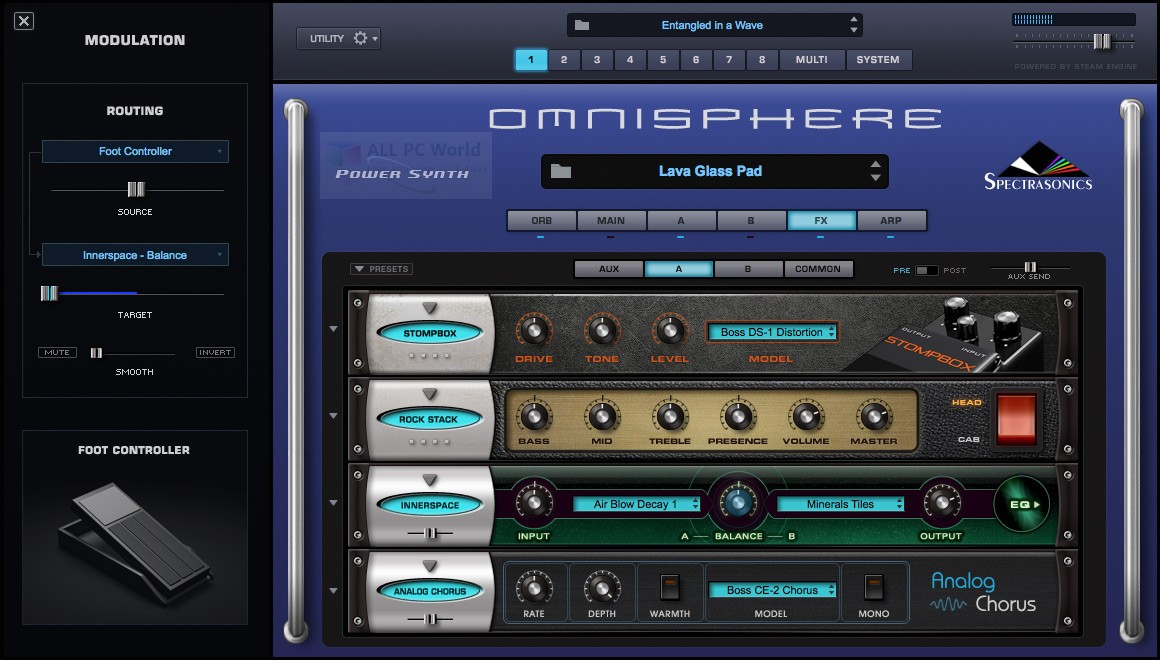 Of the individual modules, it's the EQ that has seen the most new development. As well as the ability to zoom into the already very clear real-time FFT display, new filter and shelving modes have been added. You can now choose Baxendall filters or 'Vintage' Pultec-style low and high shelving EQs, as well as the intriguing 'resonant shelf' option. The only plug-in I've seen before that offers resonant shelving EQ is Waves' H-EQ, and it opens up some interesting possibilities, especially at the low end where you want to combine boost and attenuation within a fairly narrow frequency range.

The Dynamics sections also now feature a high- and low-pass filter which can be applied either just to the side-chain or to the incoming audio. Unusually, this too can be made resonant, which could have some interesting applications, though I'm not quite sure what they are. External side-chaining within compatible hosts is a nice addition, too, as not too many plug-ins offer side-chained multi-band compression. You also get the option to use one band's signal as a side-chain source for the other bands, which might provide a neat way of getting the kick drum to pump everything else.

As well as visual improvements, there are said to be behind-the-scenes changes to the algorithms of the Exciter and Transient Shaper sections; having used version 1 of Alloy, I can't tell you how apparent these changes are, but what I can say is that the multi-band Exciter is a definite highlight of Alloy. The input signal can be divided into one, two or three frequency bands, and a neat X-Y plot then allows you to apply different degrees and types of harmonic distortion to each. I was not quite so taken with the Transient Shaper; although the multi-band option (as pioneered by Waves' Trans-X) is nice, there's no control over the duration of what is considered an Attack or Sustain, only over the level.

The De-esser appears largely unchanged in version 2, while the only significant improvement to the Limiter is the ability to run it unlinked on stereo material. This can be useful where the left and right signals are very different in content, and you don't want peaks in one channel to cause gain reduction in the other.

Among the new EQ algorithms are resonant high and low shelving equalisers, which open up some interesting possibilities.

As I've just mentioned, I was coming to Alloy as a new user, so I don't know how much difference the redesigned interface has made in terms of usability, but I found it refreshingly simple to use for such a powerful tool, and my impression is that anyone who has a passing acquaintance with what a compressor or EQ does should pick it up fairly quickly. The controls are clearly laid out, and metering and visual feedback are excellent — I particularly like the scrolling waveform views that show you when gain-reduction is being applied.

In general, I think the question of whether Alloy 2 is for you depends on how much you buy into the 'one plug-in for everything' philosophy. On the plus side, this means no mucking about opening and closing endless plug-in windows, it means you only have to learn one GUI, and you perhaps have fewer gain-staging issues as your signal is passed from one processor to the next. On the down side, I wonder whether it brings the temptation to use more processing than a source really needs; I certainly think that would happen if you relied mainly on the presets, which tend to be pretty heavy-handed. To my mind, things like exciters, limiters and transient shapers are specialist problem-solvers rather than everyday effects, and in a plug-in like Alloy it takes some self-discipline to avoid overuse of these tools. If you already have other good plug-ins, of course, you might simply prefer the pick-and-mix approach: for instance, although Alloy's bundled de-esser and transient shaper are perfectly usable, they probably wouldn't be my first choices.

When used with care, though, I can't fault the results that Alloy 2 delivers. The two crucial processors for most purposes are the EQ and Dynamics, and both are extremely versatile in terms of functionality and sound. Whether you need transparent level control and surgical precision, or something fluffy and vintage, you'll find it here. The Exciter is, likewise, probably the most flexible I've ever encountered, and the other modules all work very well too. The redesigned interface packs a lot of information and controls in without ever feeling intimidating or cramped, and I'm sure that Alloy 2 will win lots of friends among those looking for an affordable, powerful and friendly set of mixing tools.

The obvious rival for Alloy is IK Multimedia's T-Racks, though this is perhaps pitched more as a mastering than a mixing tool.

If the idea of a single processing plug-in to do everything appeals to you, version 2 of Izotope's Alloy improves what was already one of the most comprehensive toolkits on the market.